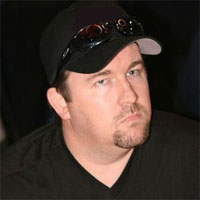 Christopher Bryan Moneymaker was born in the US on November 21, 1975 in Atlanta, Georgia. His last name has proven to be an omen of his future as a professional poker player. His family history is an interesting one; his family used to make gold and silver coins and thus chose to change their last name to “Moneymaker”, a very fitting name. Later on in life he graduated high school in Knoxville, Tennessee, and then got his master’s degree in Accounting from the University of Tennessee. After graduating, he worked as a comptroller, and worked part-time at a local restaurant. He now lives in Nashville, with his wife and daughter, where he often flies all over the place to participate in poker events.

He was unknown until the 2003 World Series of Poker’s main event. He managed to win a seat at the prestigious tournament by winning in from a $39 satellite tournament at the online poker site PokerStars. That said, the manner in which he won the chance to participate at the WSOP was not exactly what really got him noticed; it was how he played during the main event. His playing style caught the eye of many professional poke players, including the professional sports handicapper, Lou Diamond. Diamond stated that when he saw Moneymaker’s style of playing, he knew immediately that this underdog was going to win. He won the 2003 WSOP Main Event, winning not only the $2,500,000, but also gaining the fame that came with winning the tournament; it was his first time playing in a live tournament.

After winning the WSOP, he got recognized as a valuable poker player. He went on to start playing in other large and prestigious live tournaments. While playing the World Poker Tour, he finished in second place at the 2004 Shooting Stars event and won $200,000. He also enjoyed playing in online based tournaments. He played in two events during the 2008 World Championship of Online Poker where he made off with over $160,000. He continues to play in live and online tournaments, where he has fun making money; he is an accountant after all. At the time, he was viewed as a normal person, an ‘average joe’ – recreational poker player, and thanks to his triumph success at the biggest poker event of the year, he made online poker even more popular, with tons of new players inspired to be big like him, and win big like him.

Chris Moneymaker is not just an accountant turned professional poker player anymore. After his major win in 2003, he got noticed by several entities. He became a celebrity spokesperson for Harrah’s Entertainment, the WSOP owners. He was also scouted by the very same online poker site that he used to gain entry to the 2003 WSOP, PokerStars. He is currently a member of the PokerStars team and still plays through the website. He is even an entrepreneur, as he started his own company called Moneymaker Gaming. He decided to share his story by writing an autobiography titled Moneymaker: How an Amateur Poker Player Turned $40 into $2.5 Million at the World Series of Poker. It is a good book for anyone looking for motivation and techniques that Moneymaker used.

Play the game, and become the next Moneymaker!