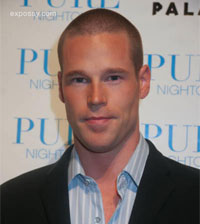 Patrik Antonius is truly a man of many talents. He was born in Finland on December 13, 1980 and he later moved to Monte Carlo where he currently lives with his wife, Maya Geller, and his two children. He did not start out as a poker pro though; he shined in other areas first. He used to be a tennis player, after which he became a coach. At the same time he became a professional model back in Finland. When he started to play poker, he was mentored by a great poker player, Marcel Lüske; he became a part of the “Circle of Outlaws” a group formed by Lüske. Ever since becoming a professional poker player he has gained the popularity for his wins, as well as for his playing style.

As Patrik Antonius became more and more of a better poker player, he finally made his name during the 2005 European Poker Tour and World Poker Tour tournaments. During that time he ended them by placing near the final table of each. 2005 was a good year from Partik, as he continued his debut by finishing in the money in three events during the 2005 World Series of Poker. He later finished third in the EPT Main Event table in Barcelona, and a month later he took his first win in an EPT event, winning over €280,000. By the end of 2005, in the December WPT Five Diamond World Poker Classic he got second place and winning over $1 million. As anyone can see, 2005 was a stellar year for Patrik Antonius and that was just the beginning.

In 2006 he managed to take ninth place at the WSOP H.O.R.S.E. event where he took home $205,920, which incidentally was his biggest cash that year. He placed third at the 2007 WSOP Pot Limit Omaha Event, and continued to play in various other WSOP events, but sadly with no wins. Patrik enjoys playing in live tournaments, but it is not the only place he plays poker at; he has been known to play in online poker tournaments, as well as playing in cash games. During the 2008 Full Tilt Poker Pot Limit Omaha Championship he finished in second place, earning $320,000. His playing strategy, which he is a heads-up specialist, was also the reason he enjoyed playing cash games so much. In 2009 he managed to beat Viktor Blom a.k.a. “Isildur1”, the person that defeated Tom Dwan, by taking the biggest pot in online poker history, a whopping $1,356,946.

Patrik Antonius became a regular on the show Poker After Dark, a TV show centered around professional poker players battling it out in epic matches that most fans would have wanted to see happen at any of the live tournaments. During his time on the show he managed to make history, by losing twice to Tom Dwan, where the pot was the biggest in the shows history. He also made appearances in another poker show called High Stakes Poker. He was on the show from season 3 through season 6. When playing in the show, he managed to take the largest pot ever on High Stakes Poker at that time. When Patrik made a name for himself, the team at Full Tilt Poker took notice and invited him to join their team. He has ever since then played under his real name and can still be found playing at the Full Tilt Poker website.

His most notable success has been playing in the European Poker Tour, where he finished first. He also managed to get to 2 final tables, and had 2 money finishes. He has also participated in the WSOP and the WPT, although he has had no tournaments wins, he has been a good contender. In the WSOP he has gotten to 2 final tables and 14 cash finishes. While at the WPT he has gotten to one final table and 7 cash finishes. He has over $3 million in live tournament winnings, and much more from cash games and online play. Keep an eye out for him because he may be winning any time soon.

Although preferring high stakes cash games there’s no doubt Antonius likes a little tournament action too however one of his main poker goals in 2019 is to make poker more enjoyable for the players and he’s setting his sights on doing just that by introducing his very own poker festival, The Patrik Antonius Poker Festival.

Patrik wants to see the game move faster and to flow better and by using an advanced shot clock that provides 10 seconds pre-flop and 20 post flop to act, and after seeing a similar clock being used in Monte Carlo EPT high roller events, he’s sure it has a part to play in the future of the game. The shot clock lowers the time to act and gets things flowing a little quicker however some decisions will take longer to make and should you wish then you're able to take one of your limited amounts of time banks. It’s all about playing more hands per hour and while that seems pretty basic and there’s no way he wants to take the game backwards by turning land based tournaments into fast online type tourneys, he is keen on keeping things moving.

He also wants officials to take a look into what players are wearing at the tables in live events, stating that hoodies, hats and large sunglasses cover up live tells and maybe these over the top items should be banned. It’s all about flow and speed while maintaining the integrity of the game, keeping it modern while observing poker etiquette and if there’s one person that the world of poker should maybe listen to, it’s a man like Patrik Antonius who spends so much of his time at the tables.