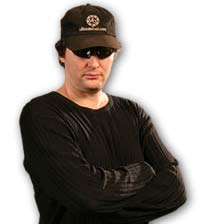 Phil Hellmuth, also known as the “poker brat”, was born in Madison, Wisconsin on July 26, 1964. He attended the University of Wisconsin for three years before deciding to become a professional poker player. As of late, Phil lives in Palo Alto, California, a perfect place to live when wanting to travel to locations such as Las Vegas to play in tournaments and the likes. Hellmuth has quite the reputation, gained from years of playing and proving his worth.

Phil Hellmuth started off his poker career at the age of 24, where he made his big win at the 1989 Main Event of the World Series of Poker by beating, at that time, two-time champ Johnny Chan. All of his bracelet wins have come from playing Texas Hold’em, however Hellmuth did play in other poker tournaments. He has won a total of 11 bracelets at the WSOP. His next win came in 1992, where he took in $168,000. He won three of his bracelets in 1993, at different Hold’em tournaments, which winnings totaled over $450,000. His next wins were in 1997, 2001, and twice more in 2003; each time his winnings got higher and higher. His last wins were in 2006 and 2007, where he played No Limit Hold’em tournaments where he won over $1.2 million combined. As stated before, all of his bracelet wins have been from Texas Hold’em, however he also liked to play in different kinds of poker tournaments. 18 of his final tables actually come from playing various other games such as Seven Card Stud Hi/Lo, Omaha Hold’em, H.O.R.S.E., and other types.

Phil Hellmuth, as mentioned above, has been known as the “poker brat” because of temperamental attitude while playing poker. He has been known to test other players’ patience by being highly “competitive”. Hellmuth has stated that he is the world’s greatest poker player, which based on his track record may be true, however this has made him feel the need to defend poker from the inexperienced. The one thing he hates is inept poker players; he usually heckles those players that have won on a lucky hand, while he himself had a good hand to begin with. All of this adds flare to any table that Phil Hellmuth sits at and most poker pro’s that have played with him are used to his attitude and learn to mock it. When he played in the TV show Poker After Dark, he was mocked by a fellow player and he stormed off the stage. He also has the reputation of arriving late to any tournament he is scheduled to play in. This kind of controversy follows Hellmuth around everywhere he goes.

Having such a great winning streak throughout his entire career has made Hellmuth into a poker celebrity and legend. He is a member of the WSOP’s Poker Hall of Fame and holds the record at most bracelets won, 11 so far. Just at WSOP tournaments he has also been to 45 final tables and had 85 money finishes. When he won the 1989 WSOP Main Event, he got the highest ITM finish. His career is not limited to just the WSOP, although it does make up a big part. He also played at the WPT; however he has not been able to win a title yet. He has been to 4 final tables and has had 13 money finishes. Due to his successful career, as of 2011, he has $13,000,000 in total live tournament winnings. This places him as the fourth on the All Time Money List. Even though he is known for his temperament, his skills and poker prowess cannot be denied; he truly is a great poker player.