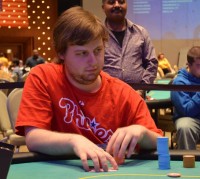 Joseph McKeehen showed just how to close out a game by taking the WSOP Circuit Caesars Atlantic City Main Event. The player from Philly stormed to the gold ring and a first place prize of $174,150 in some style. His march to the win started late on day twoas he increased his lead massively in back to back hands in which he held pocket Aces. This meant that going in to day 3 he was well ahead of second placed Raymond Morgan and way ahead of the pack. The buy in at $1,675 attracted a total field of 540 players and 19 made it to day 3 however that number was rapidly cut to 14 in the first hour of play and again to just 11 in the second hour. During this time McKeehen steadily increased his lead by playing solid no risk poker whilst eliminating Gregory Masters in 11th place. Soon after Thomas Sheets went out in 10th and we were down to the final 9. However, this day was all about McKeehan, the youngest player at the final table and as that table started he was so far in the lead it was always going to be a big ask to beat him. McKeehan in fact never lost the lead and never looked likely to and over three 75 minute periods he took the title. Allie Prescott went first and Leo Walker wasn't far behind. It didn't take long for the field to be cut to six as Morgan went soon after. John Holley went next in a huge hand against Tony Sinishtaj and for a split second it looked like there may be a challenger to McKeehen's lead, but it was simply not to be. In all fairness the rest of the pack didn't put up much of a fight and Tony Sinishtaj finished off Holley, and McKeehen took out Mathews. It wasn't long before we are the heads up stage as both Thurman and Ido Ashkenazi could do nothing to stop the inevitable. McKeehen pick up a few early pots to take a 6 to 1 chip lead and set up the events final hand. McKeehen took the last hand with no drama his pair more than holding up and that was that. It was the biggest win of the young mans career and beats his turbo event win in the PokerStars Caribbean Adventure in which he won $116,230. As well as first place and the cash he also wins a seat in the 2012-13 World Series of Poker Circuit National Championship in May. Final places were as follows.... It's off to Colorado next for the WSOP circuit at the end of the month and we will of course bring you news of that event too.
Play Now