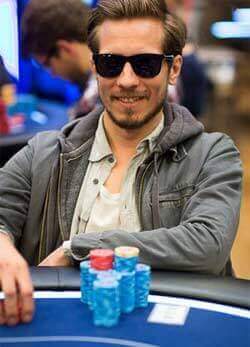 A total of 306 players took to the tables in the World Poker Tour Prague Main Event and it was Julian Thomas who eventually came out on top taking away a very nice $283,827 as first place prize money. It was the German players biggest ever cash with the only other big win coming in the 2013 Berlin EPT where he finished 7th and won $144,190.

Entering the final day nicely placed in third, Thomas was behind only Firsau and the Russian Shatilov and it was those 3 players that eliminated all others setting up a great finish to the tournament. Thomas had the tourney in his hands before we reached heads up play as in a three way hand he did major damage to the Russian and the Belarussian. At level 28 with blinds of 30,000/60,000 Thomas raised x2 and the small stacked Shatilov pushed all in. The chip leader at that time was Firsau and he re-raised with everything he had, however Thomas called with the all in which led to the great showdown. Shatilov held Queen and 10 of hearts, Firsau was holding pocket Jacks however Thomas flipped over pocket Aces. The flop, turn and river did nothing to change the situation and it was Thomas who took the monster pot, eliminating Shatilov and leaving Firsau with just the 9 times the big blind. Heads up play lasted just 2 hands and although Firsau took the first with a flush, on the second his Queen, 10 suited could not match the Ace, King of Thomas and that was that.

The Prague event was the final WPT event of 2013 and it was a fantastic tournament to end the year on, with a great Main Event. Here’s to more of the same in 2014 and we will of course bring news of all the goings on.