Will Mobile Poker Ever Really Take Off? 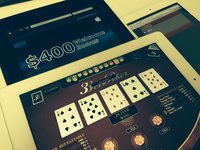 With what seems like a never ending release of articles regarding the rise of mobile casinos with every operator delivering great results from mobile gaming, and sports wagering sites constantly showing off their mobile numbers, what’s the deal with mobile poker, and will we ever see a day when it really does take off? Online poker is growing steadily and all larger rooms such as PokerStars and 888 offer a mobile poker solution but we hear little of how well they are doing, and we sure don’t see any numbers being put up in big bright lights, however we do have a few numbers for you.

Head of poker at Party, Jeffrey Haas spoke to TrustedReviews recently and he shed a little light on where they are at the moment and what they expect in the short term future. Haas believes that mobile poker will grow, in fact he thinks it will grow quite considerably. At present a mere 4% of users at Party are mobile players however Haas stated that, “I wouldn’t be surprised if it’s 25 to 30 per cent of all players by the end of 2014, if not more.” Now that is a huge shift and the end of 2014 isn’t that far away. Haas is not suggesting that a bunch of new players are going to come along and invade the mobile platform, simply that many existing users will switch to mobile, but I for one just don’t think that will happen. If Haas is in fact talking about 25 to 30% of small stakes, and recreational freeroll players, then possibly, but not across the board.

Do Poker Players Really Play On the Go?

Wherever you see mobile use of any kind mentioned, be it banking, paying bills and of course gaming, you will see the term ‘on the go’. On the go is not a term or phrase associated with winning...grinding, playing hard, concentration, strategy and the likes are terms that are linked to winning, and poker players in general, even the smaller stakes players are playing to win. Mobile poker at present simply doesn’t offer serious players, and those wishing to learn the game to a decent standard the chance to do that, and being ‘on the go’ while playing really doesn’t fit in with their game plan, and even micro stakes players have a game plan. Mobile poker will rise of that there is little doubt, but it will take a rather large surge in overall numbers for it to reach the stage where 1 in 4 players are playing on their mobile devices.

To many players, playing mobile poker doesn’t go with the agenda, especially while out and about as there are many things in poker that you cannot put a time limit on. So you’re doing well in a tourney and your battery packs in, you’re getting a run of great cards in a cash game but you’re getting constantly interrupted...silly things maybe, but all obstacles to you being actually able to win. How about playing on your mobile device from home? Sure there’s that, but honestly what’s the point when you have a full client downloaded on your laptop?

Mobile poker is great for the casual or recreational player and sure, that’s the market that it’s aimed at, but for now, and for the foreseeable future, playing well and winning means staying at home and firing up your home computer.