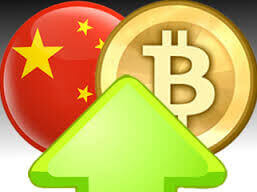 The digital currency Bitcoin hit a record high this week, and while the news in the UK was that it hit the £1,000 mark, in the US it almost reached the 1K milestone, peaking at $977 before finally settling at the $960 mark. Considering that in October Bitcoin was trading around the $200 mark that is quite some surge. Analysts are struggling to find a reason for the current surge however it has been noted that the currency is spreading further afield with many new Bitcoin users appearing in Eastern Europe and Latin America, however it is believed that it’s use in China and the fact that it is becoming more widely acknowledged is possibly the answer. There has been announcements by many companies recently that they are accepting Bitcoins, online vendors such as Wordpress and Reddit have recently done just that, however there are many small brick and mortar businesses beginning to accept the currency too, such as bars and shops.

Many people however are still put off by the volatility of the currency and the huge fluctuation in the currency means that in reality that when paying in Bitcoins, you really are having a stab in the dark as to the amount you are actually spending.

Bitcoin has still yet to make its mark in the world of online gaming and there has been no announcement by any major operator that they will be accepting the currency in the near future. There are of course smaller operators that accept the currency, Seals with Clubs, being the obvious, however it’s unlikely that the likes of the larger US facing brands will be offering it as a deposit method soon. There are still horror stories of Bitcoin theft with what seems like an endless torrent of reports of millions being stolen, and security has to be a major issue for any operator wishing to enter into Bitcoin acceptance.

Update: Americas Cardroom one of the largest US facing online poker rooms is now accepting Bitcoins. When depositing with Bitcoins the players funds are then exchanged for USD for use at the tables.