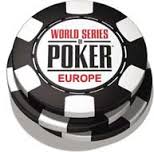 The World Series of Poker Europe is about to get underway with a fantastic line up of events and of course the big guns are all out to perform. Starting on October 12th and running all the way through until October 25th there will be a total of 7 WSOP bracelets up for grabs at the Casino Barriere Enghien les Bains, just outside of Paris. For many players it will be a short trip across the English Channel fresh from the EPT event in London that finishes this week, and there’ll be a few players that will be wanting to take their form in London over to Paris with them.

The series kicks off with the 1,000 Euro No Limit Hold’em Re-entry that begins on October 12th and there’s also a high roller event with a 25,600 buy in starting on the 22nd, however all eyes will be on the Main Event with what’s expected to be a record number of players taking part. That begins on October 19th with a 10,450 buy in and if last year is anything to go by then this year looks set to be a blast. Phil Hellmuth took the Main Event last year winning his 13th WSOP bracelet and he’ll be looking to add to that this year no doubt. There’s also a ladies event been added which is a $1,000 No Limit Hold’em bracelet tournament and with the ladies numbers up on the WSOP in Vegas this year there’s also hope that that tourney will prove to be a success.

With big names and big prize pools all getting ready in Paris the WSOP Europe has consistently grown since its inception in 2007 and this year promises to keep that growth going.