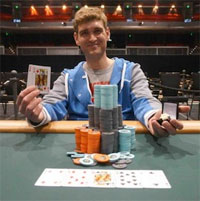 The Horseshoe Casino Hammond provided us with the biggest ever WSOP Circuit main event field as a total of 1,717 players too to the felt, beating the previous best of 1,615 which was also played here at Hammond. That record field was beaten by the Penn State graduate James Dorrance and in doing so he took home a monster first place prize of $418,526 which isn’t bad for your first ever WSOP Circuit cash! It was by far an easy win for the 27 year old player and afterwards he said, “I like to compete and it was fun at the final table, there was a lot of creative and smart players. Steven Maniaci was making my life hell all day.” It was indeed a tough final table with WPT winner Kevin Eyster, Scott Anderson and Michael Oshana all in attendance.

The $2 Million Guarantee Draws the Players In

Dorrance admits that he made his way down from Pennsylvania to Indiana because of the fact that the main event was a $2 Million guarantee and we’re pretty sure he’s not the only player that made the trip due to that. That guarantee was however blown out of the water as the huge field meant that a prize pool of $2,575,500 was created with a total of 189 players getting in on the cash prizes.

Although the day belonged to Dorrance there was another player who took a few of the local headlines. Diane Dines is a Hammond Horseshoe regular small stakes Texas Hold’em player at the casino and won her seat in the High Card Promotion at a table she was playing on. She ended up running deep, making the final table and getting a 3rd place to her name. Not only did she leave with $193,832 she also walked away to a standing ovation from almost everyone in the room. However the day did belong to Dorrance and as well as the bragging rights at being the biggest ever WSOP Circuit field winner, the Circuit ring and the cash, he also gets a seat in the WSOP National Championships which takes place in spring 2014, Atlantic City.