The WSOP 2014 Full Schedule Has Been Released 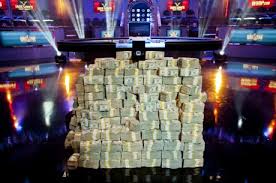 The full WSOP 2014 schedule has been released and the rumours were in fact true in that the Main Event in the 45th WSOP will be a $10 Million Guaranteed tournament. The Rio Hotel and Casino will again hold the event and it all kicks off on May 27th with a total of 65 bracelets up for grabs, however it’s the changes to the Main Event that has players talking at the moment and that guaranteed first place prize means that the winner will automatically become the second biggest cash winner in the event, second only to the 2006 winner Jamie Gold who took home $12 Million. We’ll have to wait until November 11th however for the winner to be decided.

The series will kick off with the $500 Casino Employees event however there will also be a $25,000 Mixed Max event starting on the first day too which will be a 4 day event. This year will also see the return of plenty of $10,000 Championship Events and after listening to a whole lot of player feedback the organizers have brought 12 tournaments back to the WSOP including No Limit 2-7 Draw Lowball, H.O.R.S.E, Pot Limit Hold’em, Seven Card Stud and Pot Limit Omaha events. There is also the return of the $1 Million buy in Big One For One Drop after a year out of the schedule, with this years event making room for a further 8 players meaning that the winner would take away a staggering $20 Million.

There’s also the Millionaire Maker starting on May 31st as well as the Little One for One Drop on July 3rd and also the return of the $50,000 Poker Players Championship, the Seniors Event and the Ladies Event too. Tournament organizers are looking for a bigger year than last year when over 79,000 players turned out and 62 bracelets were won, and WSOP Executive Director Ty Stewart said that, "For ten years we have tried to raise the bar on tournament poker, there is real optimism 2014 can be our biggest year yet with an anticipated $200 million in prize money to be paid out this summer. With new satellites and daily tournaments exclusively on WSOP.com and a plethora of side events, there is more reason than ever to make the trip to poker mecca." Here’s hoping for a great one and we can see plenty of interest in that Main Event $10 Million GTD that could well exceed all expectations.