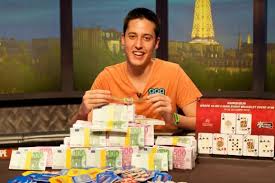 The 2013 World Series of Poker Europe came to an end with the 19 year old Adrian Mateos taking 1st place in the main event. The Spanish youngster pocketed 1 Million Euro’s and a WSOP bracelet for his sterling efforts in beating a field of 375 players that included some big names and plenty of experience. It was his first ever WSOP cash and although he has final table experience in small European events this is of course by far his biggest ever win. Straight after he defeated Fabrice Soulier in heads up play to take the win he said, “I feel amazing, it is incredible,” and that, “you will see me more.” Of that we have no doubt however it will be a few years before he can play in the big one in Vegas as he won’t be 21 until the 2015 main event takes place.

Mateos will gain a whole lot of poker respectability from this win as not only did he beat a very good field of players he also beat two bracelet winners at the final table. Although he took the chip lead to the final table there was still plenty of work to do and he was able to manage his large stack well and in winning he became only the second ever Spaniard to take home a WSOP bracelet. Things went pretty smoothly at the final table until we went to heads up play, and even though he started with a 4 to 1 chip lead against Soulier, that lead at one stage was reversed and at one stage he was all but beat.

Matoes admitted that he changed things up a little at that stage and slowly but surely he worked his way back into the game. It was a long battle at heads up with over 160 hands played and many players would have thrown in the towel after seeing a 4 to 1 chip lead reversed, but credit where credit is due and Mateos proved he can hang on in there when he needs to. It was all smiles at the end however and Mateos took the victory that his perseverance quite possibly deserved.